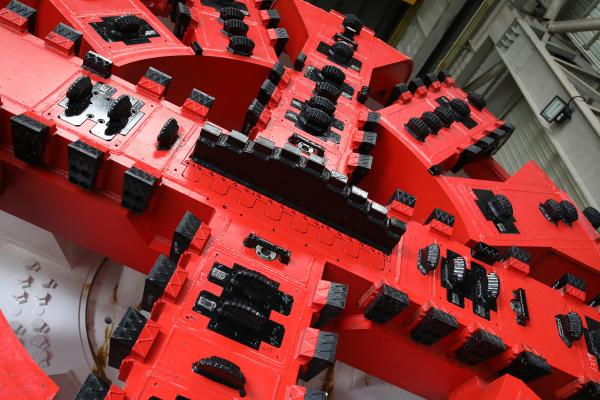 TERRATEC is pleased to announce the delivery of another EPB TBM for Surat. This unit is a new 6.61m diameter Earth Pressure Balance Tunnel Boring Machine (EPBM) that will be used on Phase I of Surat Metro Rail Project in India following successful factory acceptance earlier this month. This indicates all the machines for Phase 1 of Surat Metro Rail project will be from TERRATEC.

TERRATEC has secured all machine orders for this project: A combination of both brand new and refurbished EPBMs will be used. For Package UG-01, Gulermak will use a brand new EPBM and a refurbished TBM and for Package UG-02, JKumar will use two refurbished TBMs. TERRATEC provides all spare parts, onsite technical assistance and a key field service engineer for the whole refabrication. TERRATEC is proud to be the sole provider of all the TBMs for the project.

The Surat Metro is an under-construction rapid transit rail system for Surat in Gujarat state of India. Two corridors with a combined length of 40.35 kilometers are under construction since January 2021. The project is expected to be completed by December 2023. The new TBM will now be transported to India. Then reassembled on-site with the help of TERRATEC field service team.

The geological conditions along the tunnel alignments will be sand, clay, gravel and silt. A twin bored underground tunnel will be built between the Northern ramp and Surat Railway Metro station, using all cut and cover method across 6 underground stations. For Package UG-01, it covers Kapodra, Labheshwar Chowk and Central Warehouse stations. For Package UG-02, it covers Chowk Bazar, Maskati Hospital and Surat Railway stations.

The versatile TERRATEC EPBM units have robust mixed-face dome-style cutterheads designed to work effectively in the soil composed of sand, clay, gravel and silt. As the TBMs progress, they will install 1,500mm wide by 275mm thick pre-cast concrete lining rings, which consist of five segments plus a key.

For added versatility, TERRATEC has designed the CutterHead to allow the cutting tools to be exchangeable for 17’’ disc cutters, allowing the TBM to be able to bore through the D-walls and cope with the presence of any unexpected obstacle on its way, such as old wells or foundations.