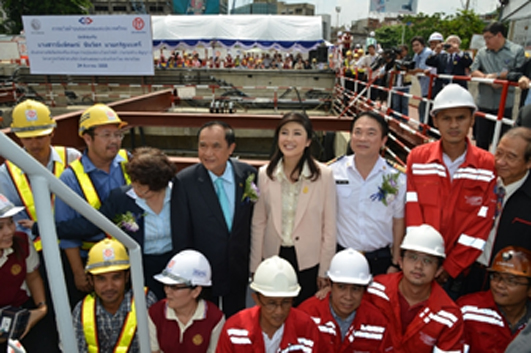 The Bangkok Blue Line Extension is the second phase of the city’s subway system and is designed to mitigate the growing traffic problem in the Metropolitan area and to better serve commuters who live in the outskirts of the metropolitan area. The tunnel will be excavated below historical Chinatown, a densely populated area, as well as beneath Bangkok’s Chao Phraya River.

The contractor will excavate the tunnel using a 6.44m diameter Terratec EPBM, designed and produced by Terratec in cooperation with Japan Tunnel Systems Corporation (JTSC), a subsidiary of Japanese-Giant IHI Group.

The EPB shield has been specifically customized for this project, with a unique IHI designed cone-type cutterhead for cutting concrete piles expected along the alignment. Terratec also provided the Tunnel Belt Conveyor System and has deployed a team of engineers and operators to assist during the assembly and commissioning of the TBM and Conveyor System.

The average daily advance is expected to be 10-15m. Ground Conditions anticipated consist primarily of soft to stiff clay and dense sand, coupled with high water pressure. The segmental lining consists of  RC segmental rings with an 6300mm o.d., to produce and i.d. of 5700mm and length of 1200mm.

This EPBM is significant for the development of Bangkok’s metro network as it’s the first TBM to bore there for ten years. The project is expected to be completed by 2015.