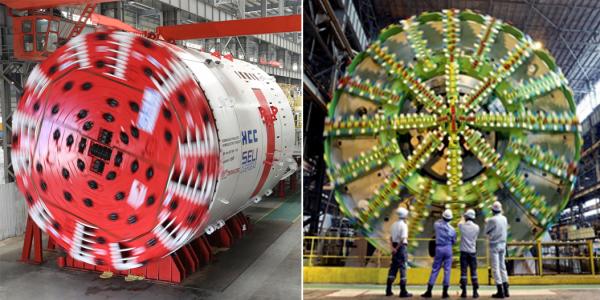 TERRATEC is proud to announce the incorporation of its business partner, JIM Technology from Japan, as shareholder of the Company.

Both companies have been working together for the last 8 years and delivered over 60 TBMs for global markets including India, Thailand, Turkey and Europe. In all these cases, TERRATEC has been the main contractor and JIMT it’s subcontractor for the provision of key components and designs for EPB and Slurry TBMs. After all these years of successful partnership, both companies decided to take a step forward and seal their relationship.

JIMT is the company created by three Japanese industrial giants: IHI Corporation, Mitsubishi Heavy Industries and JFE Engineering Corp. to merge their TBM divisions, thus combining their technology and experience of over 3,000 TBMs delivered since 1936 of every type and size up to 16 metre in diameter, for both Japan and Overseas projects.

JIMT will now hold half the shares of TERRATEC. The other half will remain with the existing partners, who will keep running the business, since the Company will keep the same structure, key managers and teams for the operation of its Marketing, Sales, Production, After Sales and Field Service Divisions.

“TERRATEC has a very efficient team working all over the world. They have achieved to become number 1 TBM supplier in important growing markets like India and Thailand and achieved continued sales in established markets like Europe. We want TERRATEC to keep operating and expanding the business as they do, but now with JIMT’s full and direct support from the Engineering and Production side” said Takanobu Miki, President of JIMT.

TERRATEC will keep its global network of regional offices and country representatives. The contact persons for clients will remain same as before. Furthermore, the market will see in the coming months TERRATEC expanding its global presence further.

As in the past years, the design of the machines will continue being carried out using JIMT’s technology for the Shield Machines (EPB and Slurry) with TERRATEC’s team in Australia taking care of the Hard Rock TBMs, Raise Boring Machines and Conveyor Systems.

The main parts of the TBM, such as the CutterHead drive unit, will keep being fabricated by JIMT in Japan, with the key components including Electric and Hydraulic Systems being sourced in Japan, Australia and Europe. The assembly and testing of the TBMs will keep being done in TERRATEC plant in GuangZhou, which is now just one hour away from the company’s global office in Hong Kong by the recently opened high-speed railway.

Regarding the Raise Boring Machines and Conveyor Divisions, these will remain fully managed from Australia with the entire design and production being done in TERRATEC’s facilities in Tasmania, as it has been since 1990.

“It is a great day for the Company. We have been cooperating 8 years with JIMT so closely and now with this formal union there are no doubts that we are together and capable to build, deliver and support any type and size of TBM for any Project in any market globally.  As we expand our team and with the increased support from our partner I think that, to coin a phrase, “the sky is the limit”” says Bruce Matheson, TERRATEC’s Sales & Marketing Director.