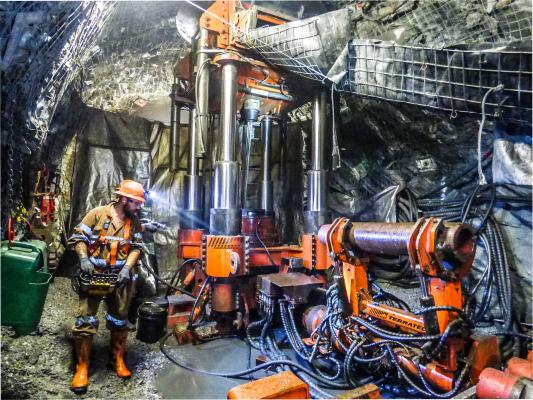 In 2013, the UB1000-R16 Universal Box-Hole Borer was designed by Terratec at the company’s facilities in Tasmania, Australia, and was delivered to a mining contractor for use in the Western Australian Gold Fields in 2014. It was specifically developed to meet industry requests for a 1.06m diameter Box Hole Boring machine that would meet all Australian mine safety standards, plus be low profile, and also could be quickly switched to operate as a conventional Raise Borer, capable of pulling up to 3m diameter holes.

The UB1000-R16 went into service in late 2014, working in a narrow vein gold mine, and was used to produce box-holed stope slots and escape ways, along with some larger, conventionally raise bored, ventilation shafts. Initial box-hole trials were successful and a number of improvements to the rig were identified, which were successfully incorporated in mid-2015.

Once the refinements were installed, the machine went on to operate almost continuously for over two years, with no major down-time and no repair interventions required. This period took the machine to 9,736 operating hours of drilling, box-holing and conventional raise-boring.

During the two-year period mentioned, approximately 200m per month of 1.06m diameter box-holes were bored on an ongoing basis. Typical turn-around between box-holes was just under three days, including mobilization, set-up, drilling/boring, de-rigging, and crawler transport to the next site. A number of larger conventional raises were also done during this period, including several at 2.4m diameter x 80m deep, and one hole at 3.1m diameter x 85m deep, at a 70-degree dip angle.

Following nearly three years of operation and many thousands of meters bored, the derrick and gearbox service work was completed in a period of less than four weeks.

Labour costs for operating the machine are minimal, as mechanized rod handling and crawler transport/erection mean the machine can be operated by a single man. The contractor using the UB1000-R16 machine has found that two operators are most efficient though.

Also, the ability to switch from box-hole to conventional mode very quickly gives the mine managers more flexibility to change their sequencing of holes later in the production schedule.

The UB1000-R16 is currently boring a series of large conventional holes, and continues to operate reliably and efficiently for its owners.

All drill string items, including 1.06m diameter reamer, 1.06m diameter non-rotating stabilizers, 10” diameter x 1.22m long drill rods and 12 ¼” hex stabilizers are able to be handled by the pipe-loader. Pick-up location is near ground level, regardless of left or right-hand dip angle, at up to 45-degrees either direction.