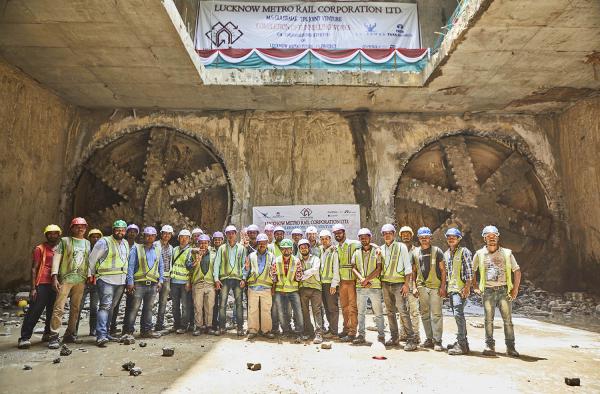 As Gulermak-TATA Projects JV celebrates the early completion of TBM tunnelling on Phase 1 A of the Lucknow Metro, Larsen & Toubro India Ltd. gears up for launch on Package 2 of the Ahmedabad metro project, in India.

Having delivered 22 TBMs to India in the last five years (more than any other manufacturer), TERRATEC continues to complete successful projects and in late-April provided more of the same as the Australian-based TBM manufacturer joined workers and officials from Gulermak-TATA Projects JVand the Lucknow Metro Rail Corporation (LMRC) to celebrate the completion of the city’s first TBM-driven tunnels as part of the the 22.88km-long (Phase 1 A) Lucknow Metro North-South line.

The TBMs mined through geology consisting of stiff to hard clayey silt and medium to dense silty sand, passing beneath historic buildings in the Capital Plaza of Hazratganj (heritage district) without any disturbance to buildings, public utilities or traffic.

The EPB machines feature a classic soil configuration with a spoke-style cutterhead and a 57 percent opening ratio. TERRATEC designed the cutterheads with cutting tools that are interchangeable with 17’’ roller disc cutters, allowing the TBMs to bore through station D-walls and cope with the presence of unexpected obstacles in the ground.

However, tunnelling through the heart of Lucknow posed a number of difficulties and engineers working on the project carefully planned every step involved in the tunnelling operation. The final drives from Charbagh to Hussainganj were possibly the most challenging, as the TBMs had to pass 1m below the bed of the Haider Nallah (canal) in a highly populated area full of dilapidated structures on weak foundations.

"During this journey, the TBMs delivered excellent performance, with no major breakdowns, crossing the Haider Nallah and so many other geological challenges along the way. We are very thankful to the entire Terratec team," says Ramesh K., Assistant General Manager (P&M) with TATA Projects. "With these state-of-the-art TBMs, and a dedicated, passionate, project team, this daunting task was completed in a world-class manner with outstanding quality and before-time completion.”

These tunnels will now provide Lucknow – the capital of Uttar Pradesh – with its first underground metro line, bringing a modern public transportation system to a city that is currently experiencing rapid population growth and substantial traffic congestion. Phase 2 of the system is due to commence in 2018.

Meanwhile, Larsen & Toubro is currently gearing up to launch the first of two 6.57m diameter Earth Pressure Balance machines supplied by TERRATEC for Package 2 (East-West Corridor) of the 20.7km long Line 1 of the Ahmedabad Metro, in western India.

Awarded by Metro-Link Express for Gandhinagar and Ahmedabad (MEGA) Company Ltd. in January 2016, the Package 2 contract includes the construction of 3.3km of twin tube running tunnels between Kalupur Railway Station and Shahpur, two underground stations at Gheekanta and Shahpur, as well as cut & cover structures, NATM connections and launch and retrieval shafts for the TBMs.

The first of the two TBMs, S71, is due to be launched in the coming days from a launch shaft located at Kalupur Station, with the S72 machine expected to follow sometime this June. The tunnelling works are due to be complete by December 2019. 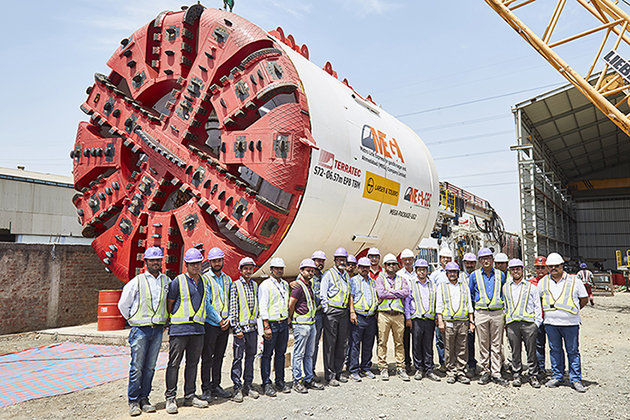 “In recent years, TERRATEC has emerged as one of the most dominant TBM suppliers in the Indian market, having supplied 22 TBMs in the last five years alone,” says Gulshan Gill, Managing Director of Terratec India, “Our clients repeatedly return to us, opting to select TERRATEC TBMs for their new projects due to the excellent performance of these machines, as witnessed by the tunnelling fraternity in India.TERRATEC’s continuing success is a result of excellent tailor-made robust TBM design, prompt onsite assistance, a readily available stock of TBM spares, and highly-skilled specialised TBM support throughout the tunnelling operation.”