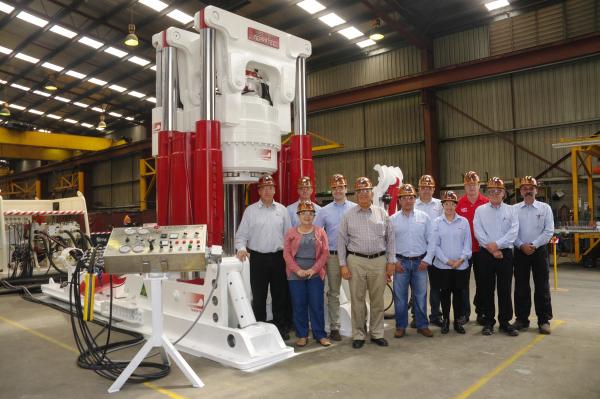 The ceremony was held in Tasmania, Australia, in the presence of the Client, Ing. Gabriel Elizondo, of Cau S.A. de C.V. (CAUSA) of Mexico after 6 months from receipt of order.

CAUSA was founded in 1978 as a service company for development of mining and civil works. The company has been exploring all types of mineralisation in the majority of Mexico and it is the largest Raise Boring contractor in the country.

The TR3000 Raise Boring Machine is robustly designed for easy use and high reliability. This machine is capable of boring a 3 metre diameter hole up to 600 metres deep in hard rock. The design and production was fully done by TERRATEC in Australia.

The dimensions of the machine were a critical element with the Derrick Extended Height of 4,500mm and Retracted at 3,815mm. This machine will fit within the drift requirements as specified during negotiations.

TERRATEC was founded in 1990 and since this date, is world renown for the design and manufacture of Raise Boring Machines, Tunnel Boring Machines, Belt Conveyor Systems and other custom-made products for tunnelling and mining applications. The company has vast knowledge in the Raise Boring sector of mining with its engineers having been associated with this type of method for decades. The company already has RBMs operating in the USA and Canada and now, with this unit going to Mexico, TERRATEC consolidates its position in all of the North America Region.