TERRATEC raises the bar in China

TERRATEC raises the bar in China 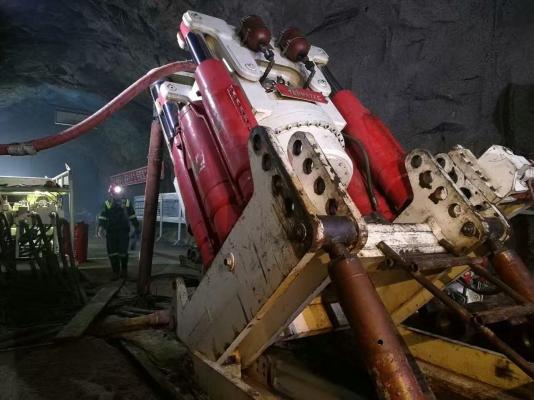 One of TERRATEC’s TR3000 Raise Boring Machines (RBM) has successfully achieved a series impressive inclined raises with a high level of accuracy at the Huanggou Pumped Storage Power Station Project, in the Heilongjiang Province of China.

Following its initial transportation from the factory in Australia, in June 2015, to copper mines located in the Yunnan and Sichuan provinces, the TR3000-R18 Raise Boring Machine carried out a number of 300m deep, 3.1 metre diameter, raises in medium strength rock (averaging 100MPa) for ventilation, manways and ore passage. This reaming work was carried out in record time, setting a benchmark for this diameter of raise bore shaft in the country. After this, the R18 machine was moved to another mining region in the far north of China where the machine undertook several more 300m deep inclined shafts of 2.4m in diameter.

Last summer, the RBM was put to work on the 1,200MW Huanggou Pumped Storage hydroelectric power station project, which is currently under construction about 90km (56-miles) north of Mudanjiang, in the Heilongjiang Province, in the far north of China.

From the commencement of operations to date, the TERRATEC machine has completed five (5) inclined shafts at angles ranging from 30- to 50-degrees with raise lengths varying from 350 metres to 370 metres and a reaming diameter of 2.4 metres.

Each shaft was completed over a period of approximately two months, including both the  pilot hole and the reaming. Despite the challenging inclines, the TR3000 machine has achieved very high levels of accuracy with limited downtime for maintenance in the medium strength rock, which has a hardness of around 120MPa to 150MPa. The machine will now go on to bore a further eleven (11) shafts for the Huanggou project.

Manufactured at the company’s workshop in Tasmania, Australia, the TR3000 Raise Boring Machine is a highly robust piece of equipment, designed for ease of operation and maintenance, providing a high level of reliability. The low-profile unit has a nominal boring size of 3 metres in diameter and 500 meters in depth and has a standard pilot hole diameter of 311mm.

TERRATEC has similar Raise Boring Machines working around the world, chiefly in Australian and North and South American mines. The company’s experienced Engineering and Field Service Teams can assist buyers from the planning stage, including custom design specifications, through to assembly and operation of the RBM on site.